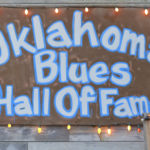 OKLAHOMA BLUES HALL OF FAME INDUCTEES
why we honor them:
Donna Lady D Brewer Gone but not forgotten. We lost Donna in an accident shortly after she played pianio and sang here at the Mini Fest in 2017….. LadyDee could rock the house with the blues or in the name of the Lord..
Al Garcia Great diversity but roots in the blues…this drummer from Moore is solid, friendly. ..D.C. Used his to play an many school gigs in the metro area.
Carl Gray brother and long time music buddy/bassist of Inductee Cecil Gray.
Debbie Henning Long time singer guitarist songwriter. Debbie works solo a lot with her acoustic guitar. Out of OKC area….also on Second Life BLUE4U NOWICKA
Main McMann From the OKC and Wichita KS region.. true deep blues great band
Bob Pacemaker Newham Worked with D.C. And Selby in Rentiesville and around the state in the 90s…
relocated to North Hollywood California, recorded 2 CDs on Alligator records with renowned harpist William Clark and toured the world. Together thy played the Chicago Blues Festival to 29,000 fans!
Ted Taylor Truly a star, oufrom Okmulgee to California…. with a string of hit records to his name … helping establish this region as the Cradle Of The West Coast Blues
Ted Taylor Sings (Warwick #2049) (1961)
Be Ever So Wonderful (Okeh #12104/14104) (1963)
Blues and Soul (Okeh #12109/14109) (1965)
Greatest Hits (Okeh #12113/14113) (1966)
Shades of Blue (Ronn #LPS-7528) (1969)
You Can Dig It! (Ronn #LPS-7529) (1970)
Taylor Made (Ronn #LPS-7531) (1973)
The Super Taylors (Ronn #LPS-7533) (1973) (with Little Johnny Taylor)
Ted Taylor (Alarm #1000) (1976)
Keeping My Head Above Water (MCA #305) (1978)
Keep Walking On (Charly #CRB-1011) (France) (1980) (compilation album)
Be Ever So Wonderful (Solpugdits #1001) (1985)
Taylor Made For You (Solpugdits #1002) (1987)
Somebody’s Always Trying (Mr. R&B #1005) (Sweden) (1987)
Pat Tointigh Solid bassist from the Lawton Area…plays with OBHOF Inductee Cecil Gray, Terry Tsotigh and many more
Terry Tsotigh great track record with his band Native Blues …playing Casinos across several states. Accomplished drummer, harmonica and Native American Flute player…
Mike Winebrenner a great sax player and all around keeper of the Blues Flame from Tulsa
Danny White A harpist and singer who has performed with many geat names in the business. He ran the Blues Saloon in OKC for many years, employing and showcasing a huge amount of blues talent.
Certificates to:
Shiron and Oscar Ray Lauree Watkins Larry Jones
Leroy Brinkley – Donor of the year Don Whitney
BOD: Dan, Harold, Harry, Donna, Jayne, DW. . . for continued service
May 26th will be a celebration in Rentiesville of this State’s Blues Tradition. And indeed it is a rich one. A record number, 11 Artists with strong roots in the State will be honored with music, trophies, Bar-B-Que and a good time at D.C. Minner’s time worn juke joint.
Oklahoma Blues Hall of Fame F.O. R. Blues Inc., E of OKC, 200 m. N of Dallas & 70 m SE of Tulsa I – 40 @ US 69 www.dcminnerblues.com selbyminner@gmail.com Info (918)855-0978
# RentiesvilleRoadTrip google OBHOF, FB Rentiesville Dusk til Dawn Blues Festival or OBHOF or Selby Minner

Adolfo “Al” Garcia was born in and raised in Oklahoma City, Oklahoma on July 23, 1954. He was raised in a family of five sisters and four brothers. Music was always a very important part of his life. From the age of twelve to the present day, Al has been influenced by different genres of music. In early youth, Rock was the predominant music scene in which he played. During early adulthood, he played Country music. Later in life, he began playing the music that he loved best, the Blues.

Early in life, Al started playing music in the home with his older brother Johnny. He picked up the guitar and started playing at the young age of twelve. Al was not a “tactical learner of music,” instead he learned to play music by “ear”. Playing with his brother, he soon went from playing the guitar to playing the percussion instruments known as the drum set. His father encouraged him to play the drums because he knew he could play them better than he could play the guitar. Throughout the rest of Al’s career, he would play the guitar for pleasure and the drums for entertainment, pleasure and money. At the age of fourteen, he and his brother Johnny formed a band known as “Johnny and the Sounds”. This band also included his junior high school classmates of Charley Timberman and Paul “David” Anthony, who later went to Tennessee and played with the country singer known as “George Strait”.

In the late 60”s and early 70”s, rock music became very popular. During this time, he played with many bands that enjoyed this style of music. In 1969, Al joined with his cousins Robert and Larry to form a band known as the “Psyterions”. They played together for the next four years. Their major influence was the “Motown” music of that time. In 1971 and 1972, he also played with two other bands, “Electric Moss” and “Grave Raiders”. After high school, somewhere between 1972 and 1974, he rejoined his brother Johnny and formed a band called “The Boys”. This was short lived and soon after he joined and toured with the band “Montana”. The traveled as far north as Illinois and Indiana. They later returned to the south and toured the southern circuit of Arkansas, Kansas, and Texas. Soon after 1974, he played with a band called “Fabel” for three years. For nearly eight years of his life, he played in the setting of “Rock-n-Roll” music, which was becoming very popular during this time.

During the years 1976-1979, times were getting rough for this musician. Country music was booming becoming very popular and more dominant in the music scene. The “Oil Boom” was at an all time high and country music seem to “sell more” than rock music. In order to keep up with changing music style, he began playing country music. During this time, he played with many different bands in order to maintain the cost of living. Of these bands the most noted were “Billy Warden Band” and “Johnny Darr Band”.

From 1980 to present day, Al has been playing the music he loves best, the Blues. The first blues band he had ever seen was “James Brown and the Flame”. He describes blues music best when he said, “It describes the passion of the soul-which communicates with the blues”. “You play from the heart with feeling”. In 1980, he gathered up friends from high school and formed a band known as “Past Tense”. Around 1981, he joined a very popular blues band called “Brownston Blues Show”. They toured the local circuit together for almost ten years. Over this period of time, they backed up national acts such as: KoKo Taylor, Albert Collins, Little Charlie and Night Cats, Fabulous Thunderbirds, B.B. King, Molley Hatchet, and Pat Travers. Every now and then, popular artists would sit and play with the band while performing. These artists included Neil Sean and Jonathan Cane of Bad English, Jim Dandy of Black Oak Arkansas, and Bobby Charles of the Drifters. In the latter part of 1990, each one of members of the band decided to go their own separate way.

Al joined “Harvey and the Wallbangers” in 1991. In 1992, he played with a group known as “Four Play”. During this time, he also played music with other local bands such as “Otis Watkins”. From 1994 through 2000, Al joined a Native American blues band that they called the “Blackhawk Blues Band”. This band was very popular locally and among Native Americans. They played on the Souix Reservation at Wounded Knee in South Dakota. They also played at many of the local Blues Festivals including, Bricktown Blues Festival and Rentiesville Blues Festival. Each year, the Seminole Tribe from Florida would pay the band and their travel expenses to entertain the Tribe and family members for the weekend festivities.

Around 2000, Al left the “Blackhawk Blues Band” and joined a new band called “A.J. Johnson and the Why Not Band”. He has been with this band since the end of the year 2000. The only leave of absence from this band was round 2005. For six months, he had to give up what he loved the most, playing music. He had drastic shoulder surgery and was advised not to play the drums for a minimum of six months. His love for music and playing made him frustrated when he knew he could not play. Under this frustration, he found out that he could in fact play with one hand, whenever it was possible. Even though it did not sound the same, just the fact of being able to drum a beat satisfied him. Shortly after the six months of rehabilitation, he found out that he could in fact play just as good as before. His love of music was once again revived. He continued with “A.J. Johnson and the Why Not Band” until 2009. They then went their separate ways. From 2009 to 2018, Al has continued to play just as fill in’s for other bands such as “Scott Keaton”, “Rick Toops”, and let’s not forget “D.C. and Selby Minnor”. He has also jammed with “Eric Gales”.

When asked who is his most influential blues artist or band. His response is “ I don’t have any one favorite. I like many of them. If I had to choose a couple of them, I would say that Lucky Peterson and B.B. King were the most influential to me”. Al has also been a member of the Oklahoma City Blues Society for the last 24 years. In his spare time, Al has been instructing and encouraging his grandsons, Gage Garcia and Jackson Benson to play the drums and exposing them to different genres of music. Of course showing them the love for the Blues.