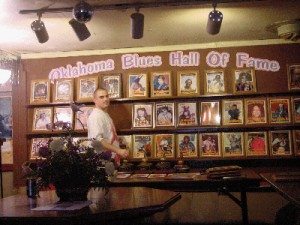 2012 INDUCTEES
LEON BLUE
keyboardist for BB King who has played the Blues Cruises for years and tours in Europe annually, and plays Rentiesville every year!

CLYDE ‘CHICO’ LAMAR
born and raised in Rentiesville was in the first singing group D.C. was in as a teenager the Five Clouds of Joy. Clyde had a long world-wide career with the “Buck Ram Platters”, the Ink Spots, the HiFi’s, and his own group Double Exposure. His Aunt Suzie Nears (93) lives in Rentiesville.

BABY RAY MUCKER
was born in Slick OK and raised in Stockton CA, he lived and worked out of Hugo for years and now fronts a new Tulsa Band, Soul Magnetic, and has a track record playing behind Bobby Blue Bland, BB, The Whispers, Betty Wright, Billy Preston . . . he sure is fun.
MALYNE ‘POOCHIE LOVE’ LYONS

KBA in Education:
JAHRUBA LAMBETH
Rentiesville Blues Festival attendees know him as the leader of the drum circles in the Kid’s Village. Jahruba has charmed listeners with the Signifying Monkey story and more for years as he slips knowledge into young minds between the drum beats – his and theirs. From NormanOK, his reggae band is the The Broke Brothers.

Lifetime Achievement:
GRANDMA LURA PEARSON DRENNON
The woman who raised D.C. and who built the building which housed the OBHOF. Miss Lura ran a corn whiskey juke joint here on this spot from 1936 until her baby – grandson D.C. left for the Army in the early 50’s. She then went ‘legit’ to 3.2 beer until her death in 1968. She returned from shopping in town one day about 1963 to find her place burned down and her life partner Charlie Drennan laying next to the ashes dead from a heart attack. He was the victim of several strokes earlier in life and had a heart attack as the place burned, realizing he could not put the fire out. She started rebuilding – with the help of friends and neighbors- the next Monday morning.

Keeping the Blues Alive KBA Awards to:
BOOKER LOWREY
We lost old friend and our first security guard Booker Lowery just after the Festival this year. He will get a KBA for his years of loyally passing out Festival PR at every major blues event in OKC since we started.

ROBERT WILLIAMS
For years of helping Domenica Lovera, Ray Tubbs and D.C. set up the field for the Dusk til Dawn Blues Festival. We miss Robert as well.
Media: LaNelda Hughes For writing the yet-to-be published biography of D.C. Minner